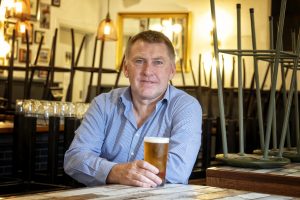 David Canny, a second-generation hotelier, has been licensee at the Red Lion Hotel, Ballarat since 1995 and is Director of the Montague Hotel, South Melbourne.

He joined the AHA (Vic) Council in 1998 and in 2008 was elected to the AHA (Vic) Executive Committee. He is now in his fourth year as Victorian AHA President. A life member of AHA (Vic) he has been a delegate on the National Board since 2013 – and most recently served as AHA National Senior Vice-President before being elected president in October 2022.

David has been a long-time promotor of the role pubs and hotels play in their communities and neighbourhoods. He has a deep interest in the accommodation sector and is active in the investment into major events.

David is a Director of Rule Prostate and the charitable arm of AHA (Vic) the Hotel Care Foundation.