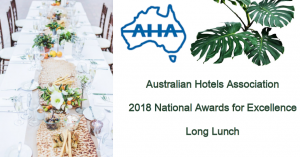 AHA Awards 2018 – Australian Highlights R4 from What's On In on Vimeo.

The national stars of Australia’s booming hospitality and accommodation industry were honoured at a gala function on the Gold Coast this afternoon.

Apothecary in Adelaide was crowned the Best Restaurant Metropolitan, while the Best Regional Restaurant went to Frogmore Creek, Cambridge, Tasmania.

Emirates One & Only Wolgan Valley in NSW was named Best Deluxe Accommodation, while the Overall Hotel of the Year (Accommodation Division) went to MACq01 Hotel, Hobart, Tasmania.

Curtin Springs in the Northern Territory was recognised for its effort in the Best Tourism Initiative section, while the Best Hotel Accommodation General Division went to the Taylors Lakes Hotel in Victoria.

The prestigious Chef of the Year was awarded to joint winners – Ashly Hicks from the Garden State Hotel in Melbourne and Nancy Kinchela from Emirates One & Only Wolgan Valley (NSW).

“Our staff and venues combine as the heart and soul of our industry,” he said.

“One brings our industry to life each and every day while the other forms its ‘bricks and mortar’ backbone – constantly evolving and changing to ensure we stay at the top of our game.

“The hotel industry is the most dynamic in the nation and a week rarely goes by without the launch of new ideas, renovations or complete re-developments at venues right across the country.

“In a time of great change – when every customer is a potential reviewer – our industry continues to set the standard internationally and I congratulate all nominees and winners.”

Among today’s highlights was the induction of Northern Territory-based liquor industry icon,

Michael Burns, into the AHA National Hall of Fame.

“He is a larger than life figure, who has made his career by taking risks and trusting his gut instincts.

“He has been at the helm of some of Darwin’s most successful pubs, has been a long time AHA NT executive and almost single-handedly created a multi-million-dollar crocodile farming industry in the top end.

“He continues to set up opportunities for indigenous communities, was at the helm of the Tiwi Island Football Club when it needed him most, and for many years his anonymous charity has been helping those who are doing it tough without fanfare or fuss.”

And Nancy Kinchela, Emirates One & Only Wolgan Valley – NSW

Overall Hotel of the Year – Metropolitan The Crafers Hotel – SA

For more information please contact our National Office on 02 6273 4007.
Images from the afternoon can be found here.